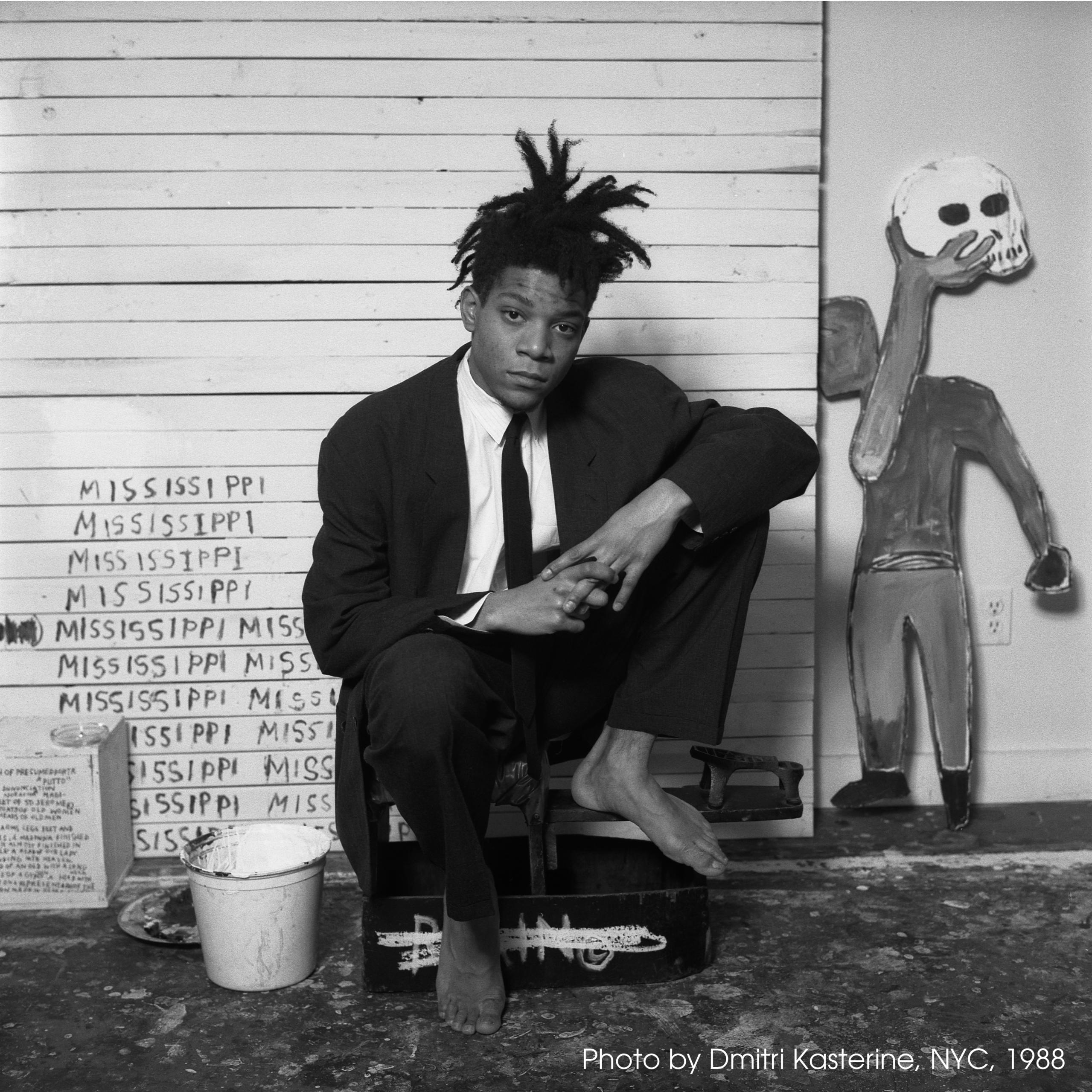 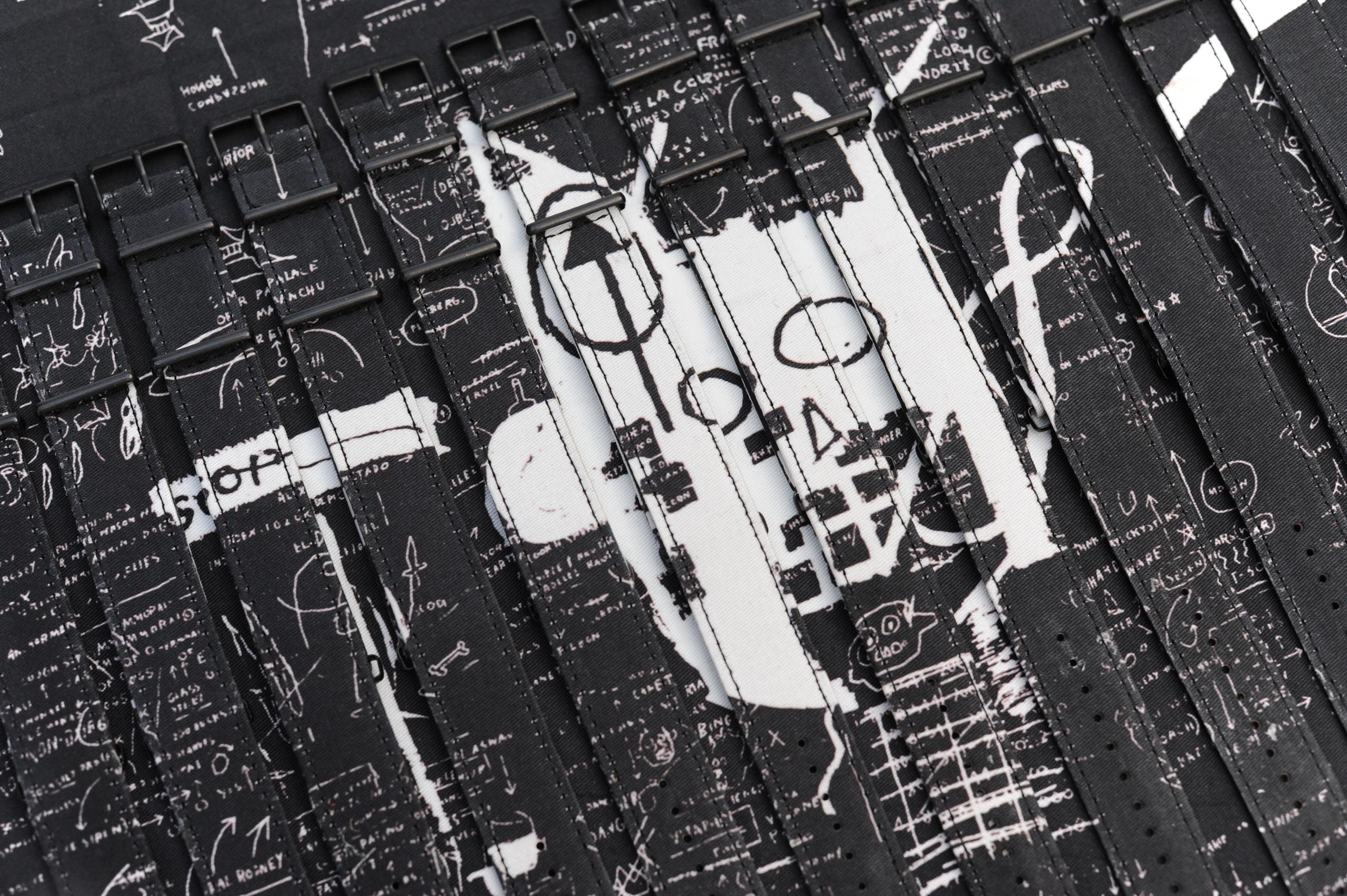 Crown your wrist with the heroic beauty of Jean-Michel Basquiat and Komono.

Jean-Michel Basquiat is one of the best known artists of his generation and is widely considered one of the most important artists of the 20th century.His career in art spanned the late 1970s through the 1980s until his death in 1988, at the age of 27.

Basquiat works are edgy and raw, and through a bold sense of color and composition, he maintains a fine balance between seemingly contradictory forces such as control and spontaneity, menace and wit, urban imagery and primitivism. The Basquiat brand embodies the values and aspirations of young, international urban culture.

Basquiat often incorporated words into his paintings. Before his career as a painter began, he produced punk-inspired postcards for sale on the street, and become known for the political-poetical graffiti under the name of SAMO.

The conjunction of various media is an integral element of Basquiat’s art. His paintings are typically covered with text and codes of all kinds: words, letters, numerals, pictograms, logos, map symbols, diagrams and more, and featured multi-panel paintings and individual canvases with exposed stretcher bars, the surface dense with writing, collage and imagery. 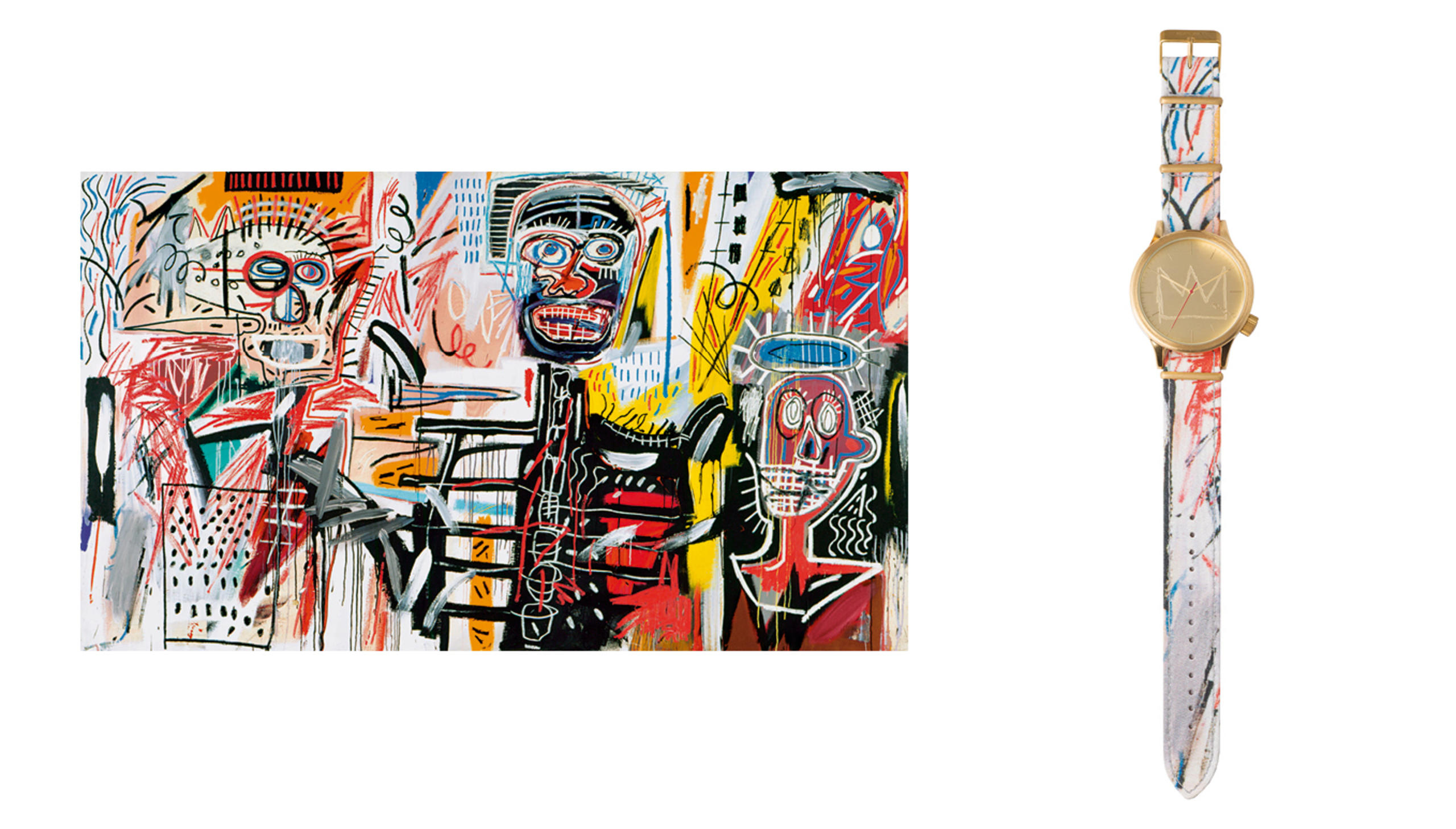 The broad and colorful brush strokes of Basquiat are echoed on the printed fabric wristband, while the gold colored clock face and leather wristband details reference the golden yellow and orange hues of the original painting. 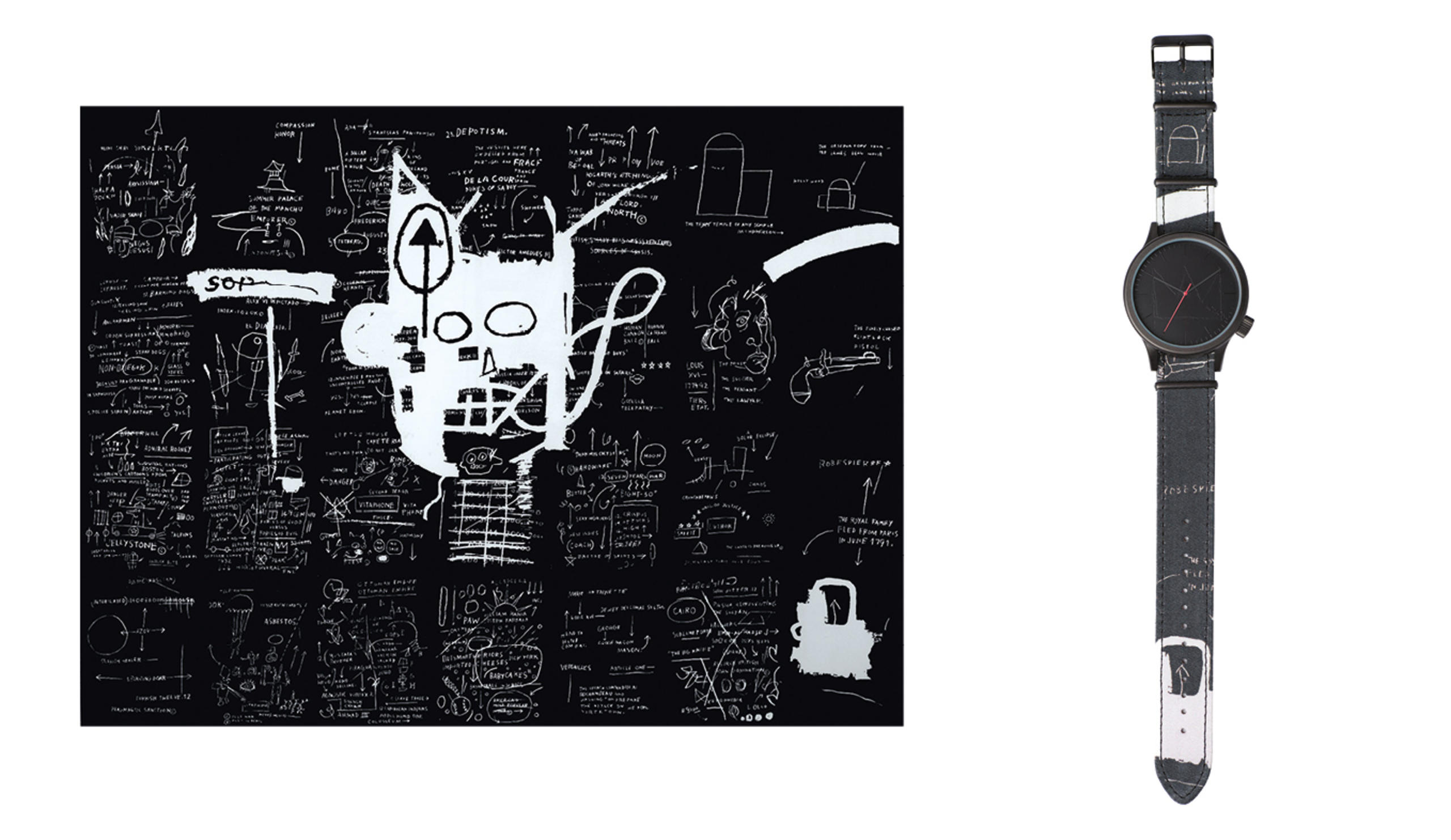 The overall darkness and the bold, contrasting energy of images vs. words find a new home on the printed fabric wristband and in the large ‘Basquiat crown’ logo dominating the all-black clock face. 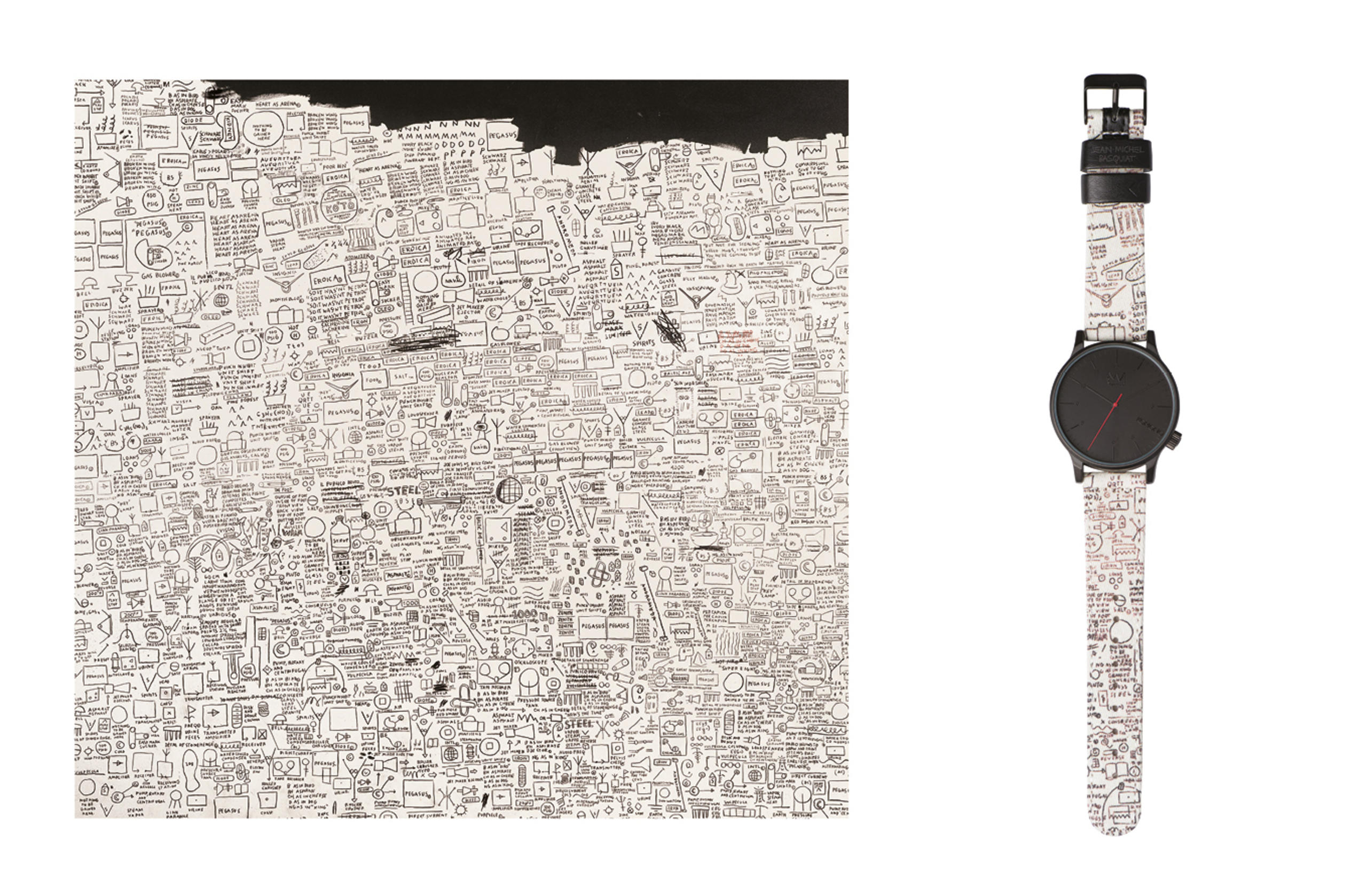 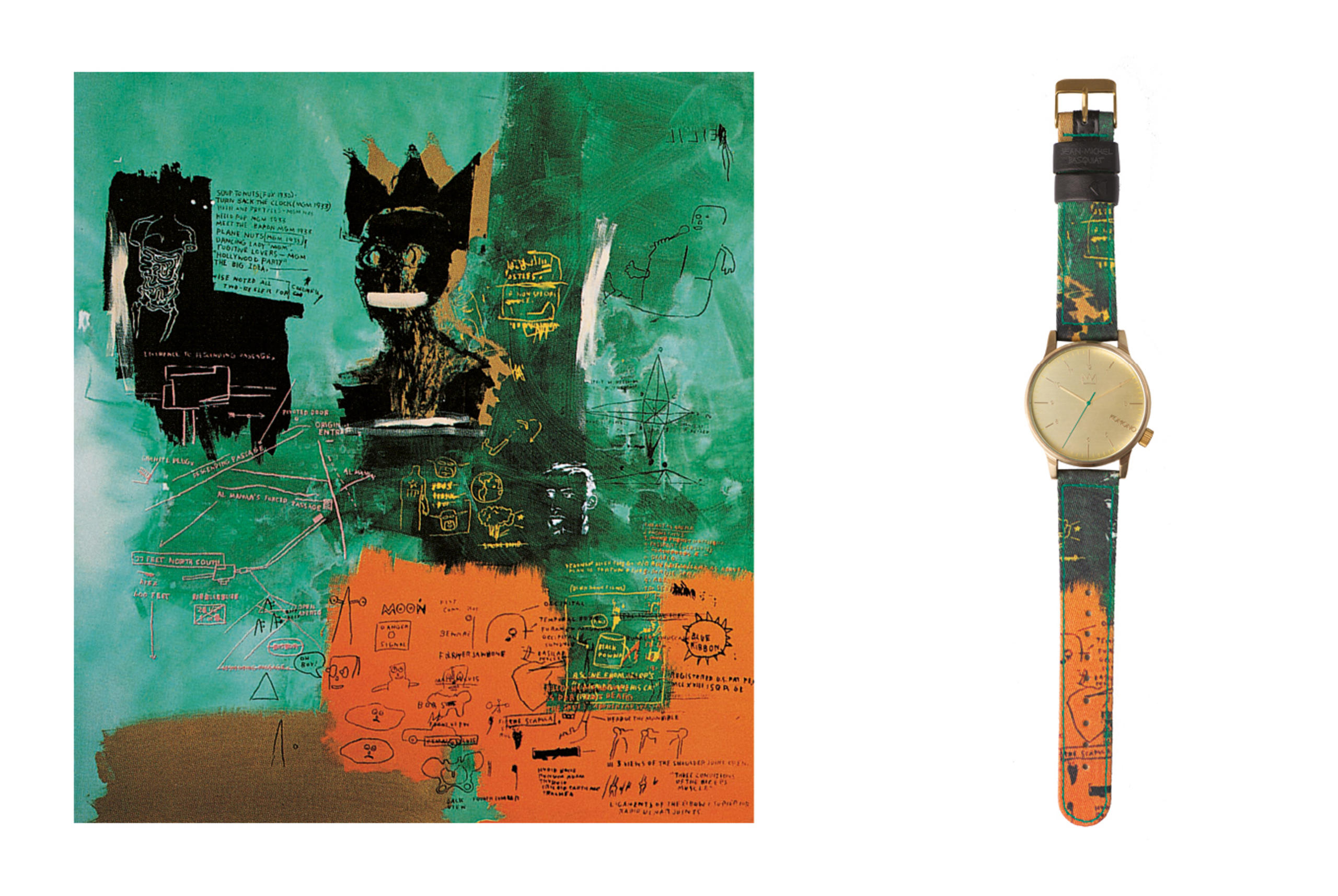 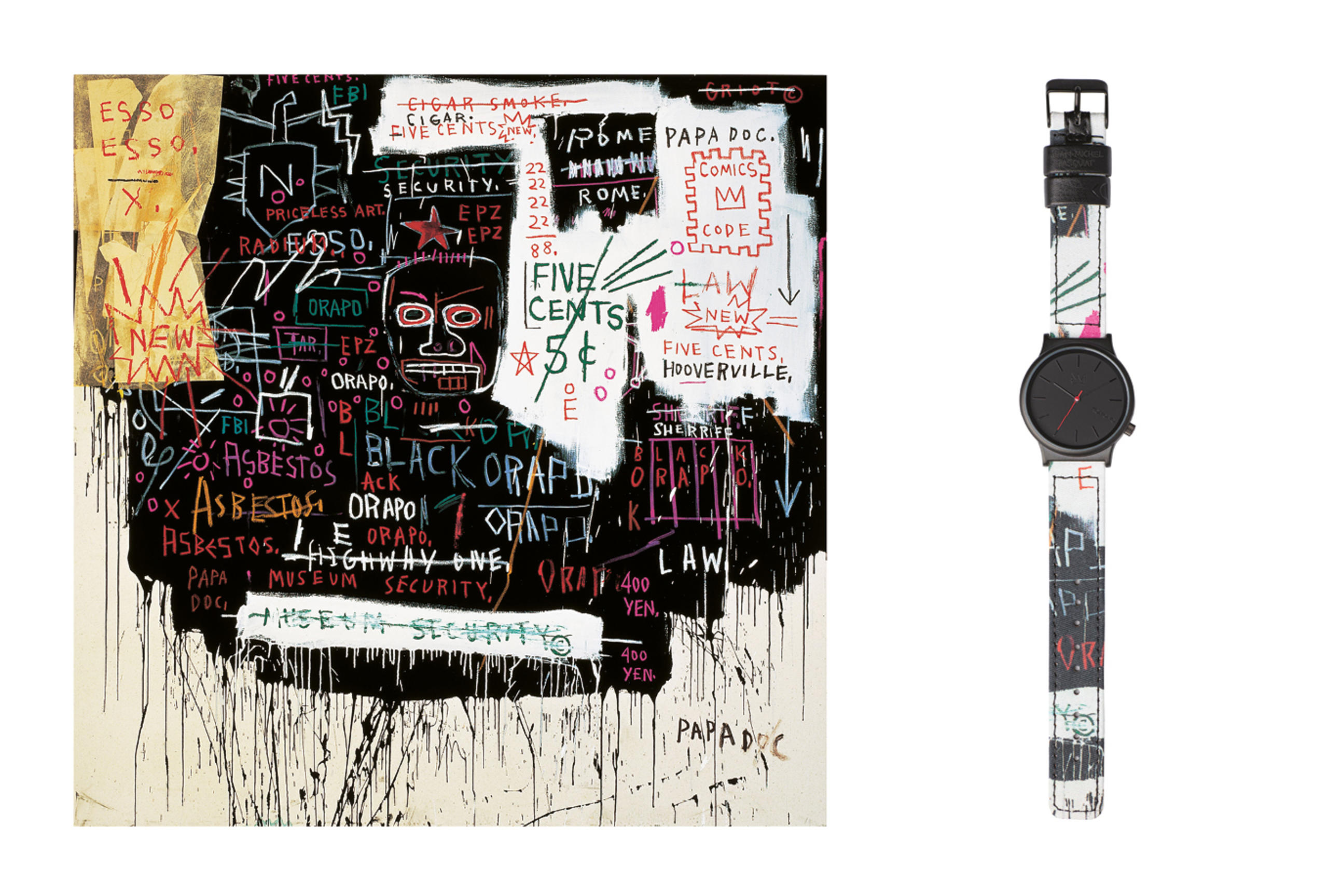 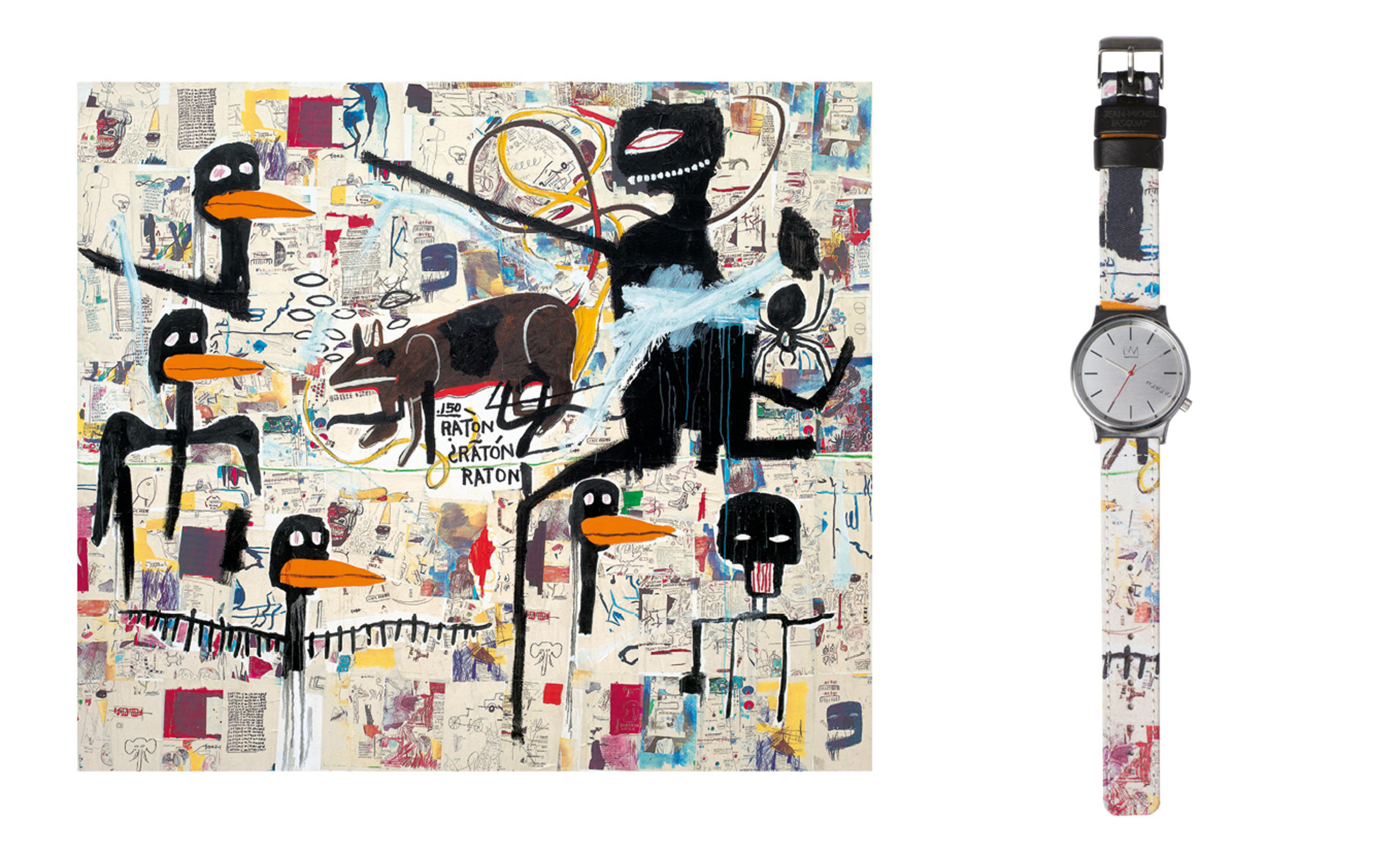 Colorful drips, lines and details and a dark black smudge on the printed fabric wristband are a subtle echo of Basquiat’s mixed media view of birds, rats, spiders and skulls.

Each and every watch in the capsule collection boasts a unique printed fabric wristband, depicting a different detail of a particular Basquiat painting. No two watches are the same.

Komono is proud to bring the raw energy and beauty of Jean-Michel Basquiat to the world of fashion accessories.

Komono is once again raising the drawbridges between design, art and fashion by collaborating with the estate of Jean-Michel Basquiat.

This unique collection of six Basquiat wristwear pieces was created to deepen and extend Komono’s trademark desire to blur boundaries, bridging the gap between accessories and high art.

Basquiat himself never respected traditional boundaries between ‘street art’ and ‘high art’ or between text, painting and other media. Komono and the estate of Jean-Michel Basquiat have collaborated closely to harness his timeless power and brilliance and create a collection of timepieces that would please a man who preferred his expensive suits splattered with paint.

Each and every watch in the capsule collection boasts a unique printed fabric wristband, depicting a different detail of a particular Basquiat painting. No two watches are the same. 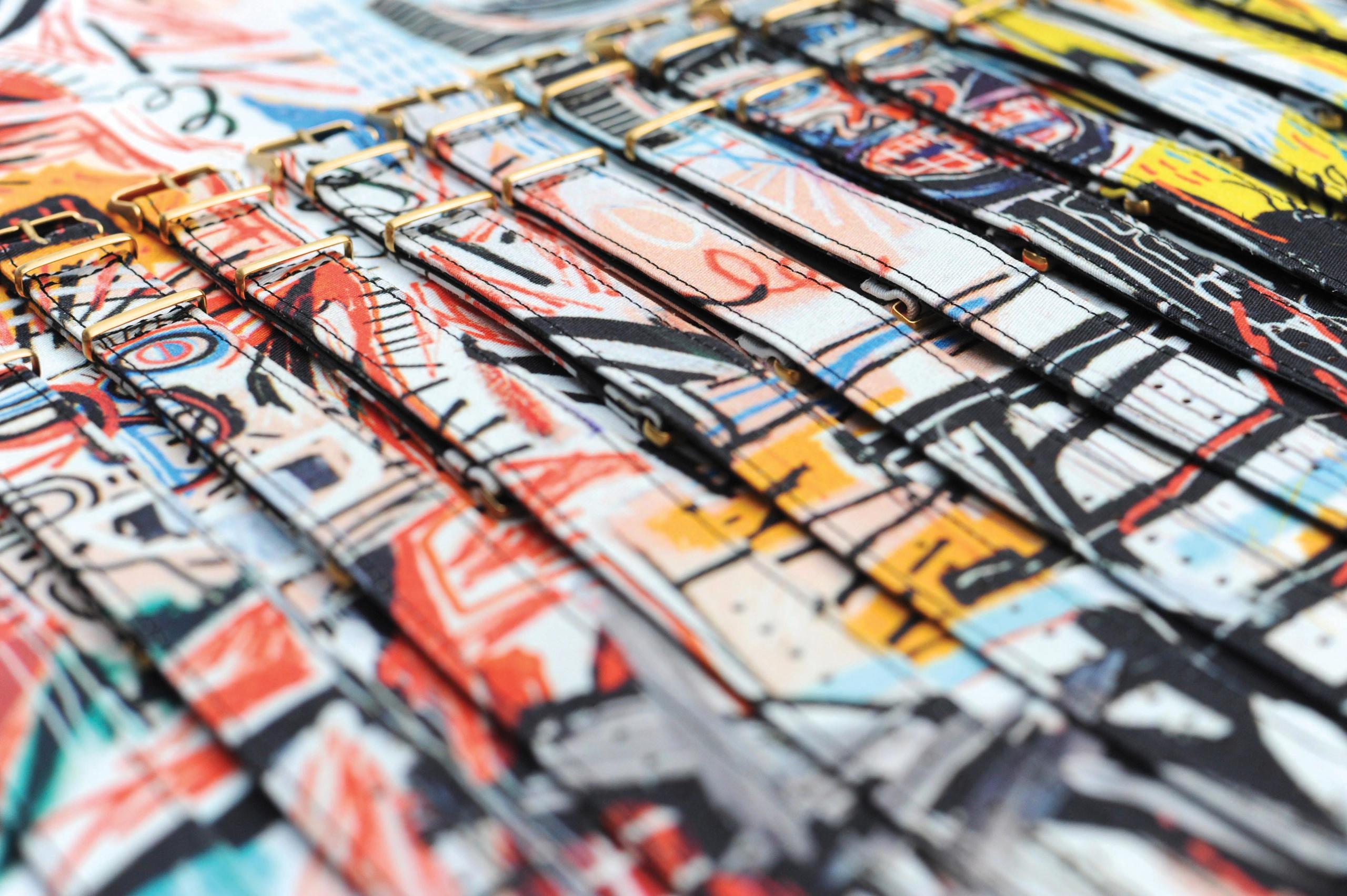 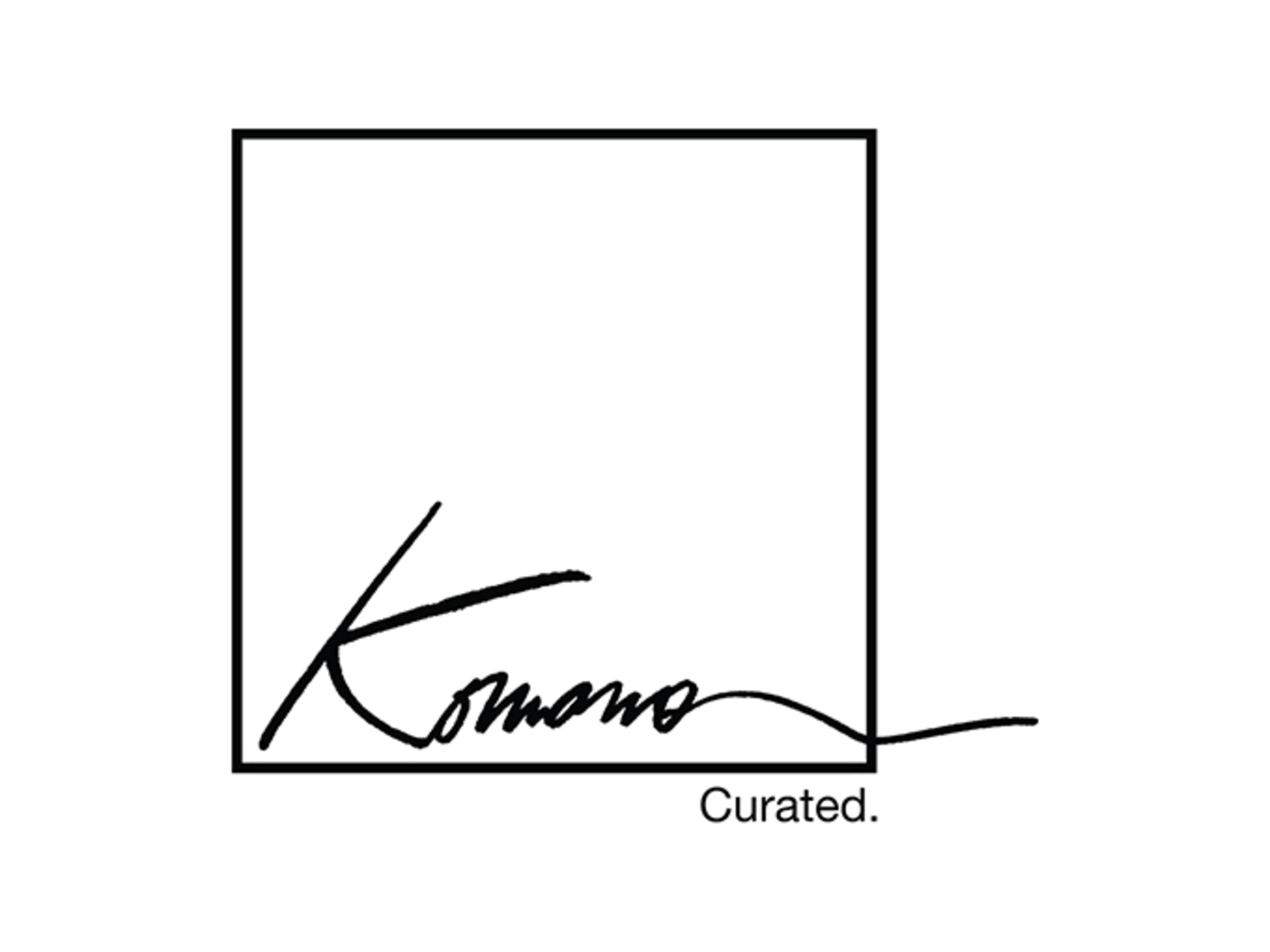